This pokie packs a wild punch! 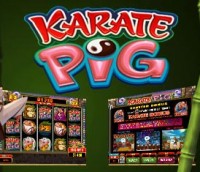 Karate Pig is one of the most comical pokies game Bitcoin.  Join the karate pig on an adventure to take on fierce competitors through karate chops and kicks.  Very ccolourfulimagery on screen and the more you hit the bonus the higher your karate belt becomes.  You win the karate bonus by hitting the karate pig bonus 3 or more times.  The free spins scatter will also provide heaps of free spins.  Overall this is one of the most popular pokies games to play for free.

Karate Pig features cartoon character symbols that are themed on the karate kid including the Karate master, buddha, cat, raccoon, bonsai and sushi.  The Karate Pig logo acts as the wild symbol and substitutes for all others except the scatter.  It is possible to win a lot of money if all lines light up with the wild symbol.

The pig scatter lands on any of the paylines and golden crane lands on reels 1 and 5 only.

The Golden Crane when landed on reels 1 and 5 on the same spin wins the free spins bonus feature.  This is 15 free spins with double winnings.  Free spins can be retriggered at any time and players can win up to 800,000 credits during the bonus.

Three or more pig scatter symbols win the Karate Pig bonus games. There are three levels including the Pork Chop bonus game and the Hammer bonus. karate belts can be won with successful selections to provide coins.  If you are lucky enough to collect enough then you are granted access to the Final Showdown bonus game.  This is a three-round show-down between Karate Pig and the fierce opponent, awarding prizes for wins.

Karate Pig pokie is a fun and addictive game with high paying bonuses and free spins.  Just like the games you would recognise from Bitcoin online casinos. You can try out your fighting skills for free by playing our exclusive demo game.